Yes, my name is Michael Jackson, but I don't drink cola, I drink beer 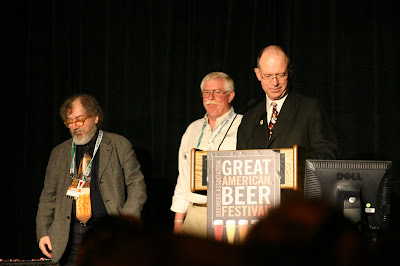 If you haven't read yet, Michael Jackson, "The Beer Hunter," has passed away. Nothing that I can write here will be as eloquent as what others have already said today, so I will give you lots of links to catch up. I will however share my beer hunter story.

Here is Michael's last article at All About Beer magazine's site.

Tomme Arthur also writes. He says this which also stuck me as I was reading MJ's last article, "As I was reading, I was struck by his voice in my head narrating that story. It was his very distinguished British voice that sticks with me." The only other person that this happens with for me is Garrison Keillor.

I have seen the Beer Hunter videos countless times. My dad started homebrewing when I was about two years old and we watched those VHS's a lot. I always hoped there would be more, updated just like his quintessential beer guides. There is word that his final manuscript just went to the publisher a week ago. The Beer Lexicon looks like it might be Michael's final written contribution to the beer world, but his lifetime of contributions will be felt for generations.
Posted by brewer a at 4:16 PM

Oh man this is sad news. I have spent so much time on his website reading about beers I hope to someday try.

We seriously considered it but decided that It just wasn't going to work out for us. Setting something up and promoting it last minute doesn't work very well at the pub. But we sully support it and I'm going to try to be at Map Room for their deal.