I haven't had much of a chance to contribute to this blog and wanted to use this chance to give a brief update to what's going on around here.

A few weeks back we brewed our IPL, the Intercontinental. Bryan and I had talked about using a lager yeast to ferment an IPA-hopped beer, so we came to the idea of blending not only the fermentation regiment, but also the hops. We used both Pac NW hops such as Armarillo and Northern Brewer with the continental varieties such as Mt. Hood, Liberty and Halleutaur to create a true blend of continental lagers with US IPA's! Today, we dry hopped it with Mt. Hood, Liberty and Ahtanum to keep the blend going, and are very excited to see what becomes of our first IPL, which we should release come December.

In continuing our lager phase, we also brewed our Killer Kapowski yesterday, a lovely Baltic Porter, using 8 different malts plus molasses, which we are anticipating big results come ring-side!

Last, but not least, we'd like to introduce Dean's Beans, our coffee stout using fine Italian roast whole coffee beans, cold brewed with our Iron Horse Stout. Look for it around the beginning of next year!
Posted by nickb at 3:36 PM No comments:

What a day it was at the Chicago Journeymen Plumbers Union Hall in Chicago this last Saturday! The Illinois Craft Brewers Guild did not dissappoint in the production of it's 8th Festival of Wood and Barrel Aged Beers. With over 150 entries vying for 30 medals in 10 categories, the competition was more fierce than ever as brewers continue to step their game up for bragging rights and innovation with wood and barrels becomes standard in the craft beer world, no longer taboo or rare.

We entered a modest 4 beers in the festival this year, some old friends and some new comers, and couldn't be happier with the results.

Flossmoor earned a Silver in Category 3 Barleywine/Wheatwine (17 entries) for our Barrel Aged Hi-Fi Rye Wine's debut to the public. Not done yet, the boys were able to grab a Gold in Category 10 Wild Acidic Beer (25 entries) for the oft-requested Rosie Pom Pomegranate American Sour Ale.

You can see the full results here. Special shout-outs to all of our Illinois colleagues who won awards and our friend and former brewer Todd Ashman of Fifty Fifty Brewing for grabbing a medal.

Thanks to everyone that came out, gave feedback and encouragement, and continue to support the beers, our brewers, and Illinois beer! 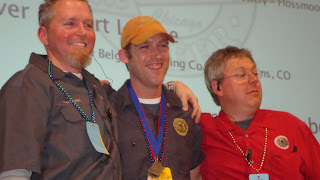 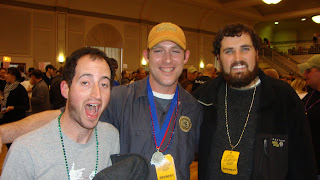 Posted by BloggerA at 8:05 PM No comments: