If you hop on over to Appellation Beer you will find my guest entry about my fantasy beer dinner. Stan Hieronymus asked me and four others who we would invite to a beer dinner if we could pick four people (living or dead), what beer we would serve, and what we would eat. Check out the results, it's a pretty interesting read.
Posted by brewer a at 3:44 PM 1 comment: 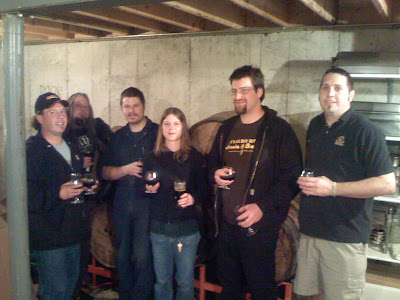 Surly is being distributed in Chicago now, and when they were here on their whirlwind tour, they surprised us by dropping by on their way to the city via Three Floyds. This is us sharing some barrel aged beers in the basement. Thanks to Omar for the photo.
Posted by brewer a at 3:38 PM No comments:

Will we make it through this dilemma unscathed??

The answer is yes. Wait...what's the question?? If you haven't heard, the beer industry has been given a little shakeup with the recent news that malted barley prices and hop prices are on the rise. However, a worse situation is the fact that a shortage is partly to blame for the skyrocketing prices. If you haven't heard the news (it has snuck out of our industry into the mainstream news media) try here or here

Anyway, I tried to avoid spending too much time talking and thinking about it, but since I've been bombarded with questions like, "Hey, have you heard about the hop shortage?", or "Will this problem affect you too?" The answers, shortly are "yes", and "hell yes!"
I won't spend a lot of time talking about the industry as a whole and how this will shake out-that's been covered quite well thus far. Instead, I'll give you a little peak into how it is going to affect my world:
As a 600+bbl brewery, I'm known as a little guy. In fact-a real little guy. Obviously, the prices are bad as I pay what others pay, so that affects me. And as far as sourcing hops during this time of shortage-well, still a little guy. However, the fine folks at Brewers Supply Group (yes that is a picture of my brewhouse on the front page-thanks guys!!) and also MidCountry Brewing supply have been able to contract hops with me for the upcoming year and beyond, which does two things 1) locks me into a price and B) assures that my hop needs are covered. The big breweries have been doing this for years. They deal in futures and are protected to some degree when big fluctuations happen. My suppliers sometimes try to make me feel like a bigger guy (thanks again guys!) like when Chris German came by for some hop selection on some of our contracts. I think Andrew posted some pix at that time. In a nutshell, we got to choose which lots we wanted our hops to come from. They certainly didn't have to do that. Our lack of business isn't going to sink this company, but they have something others don't-good customer service (thanks again guys!) Fortunately, Todd Ashman of Fifty Fifty Brewing company in Truckee CA and formerly of BSG was always good about letting me know what was in small supply and what needed to be contracted. That started my relationship with BSG and their hop contracts and I have always had some of my hops contracted. This year, I just had to expand on that contract and I feel very good about where I'm sitting. I was even told that we are in a better position, hopwise, than some breweries who crank out 10-15000 barrels per year. Yeah baby!
So, what does that mean to you, John Q. Beer drinker-It means we won't have to stop making IPAs and such and we won't be making gruit anytime soon! That may not be true however for all breweries around the country. Some are SCRAMBLING to find any kind of hop to put into their beers-they didn't have a contract set up. And new startup breweries-good luck. They're being put on a list to wait and see what they can get. Like scraps to the little mouse. Not a day goes by that I don't see someone begging for hops. Trades are usually better than cash. It's really nuts. While somethings here at FSBC might change a bit, it should hardly be noticeable to you-I hope :)

What about your prices, Matt? You can't survive when ingredient costs rise 100-1000%! Sure I can. Our pints just raised to $6! Just kidding-relax. For our local readers here, you know that pints at FSBC were $3.75 from 2005 through this past summer-a good deal really. On September 1st we made a little economic adjustment (that was in no way tied to this situation) and pints became $4.00-still on the low side for many craft beers in a major metropolitan area. This should more than cover my increased costs in the brewhouse. So don't fret, we'll have the same high quality beers flowing without breaking the bank.

However, you probably could see a number of increases throughout the industry. Hopefully, these increases are just to cover this new situation and not a reaction to the panic.(but remember that stainless costs, transportation costs, and energy costs continue to climb-it ain't pretty) But do be ready to shell out more in certain instances. All I ask is that you continue to support craft beer. We've spent a long time getting craft beers into the national public's attention and building this craft beer movement and I would certainly hate to see this be a step back in our progress of educating people what real beer is. A couple of dimes increase per beer shouldn't send you to the poor house. Drink it and Drink responsibly! The only way that we can continue to have the variety and quality of craft beers on the market today is to continue to support and drink and also tell our friends about the wonders of craft beer. Ok, so I need to step off the soap box for a moment, but what I do want to say is that without great support from our fans, and often at a grass roots level, craft beer couldn't survive. I just read an article about how AB will be spending lots o' millions on a revamped ad campaign. Not many of us have lots o' millions. But what we do have is a dedicated group of adults who enjoy flavor and diversity in their beer. So don't panic. Take it all in with a grain of salt. Great beer will keep flowing. 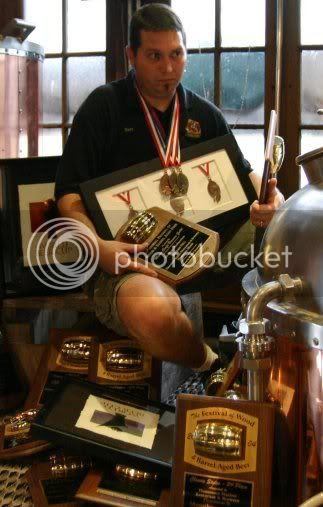 (p.s. this is an outtake from our recent photo shoot. We are working on a new ad)
Posted by brewer a at 7:29 AM 3 comments:

Pumpkin 3.14 (5% a.b.v.)
Our Fall special spiced with cinnamon, nutmeg, cloves, allspice, ginger, maple syrup, and vanilla. Not to mention 78 lbs of whole roasted pumpkin in the mash and 60lbs of prepared pumpkin in the kettle. Pumpkin Pie in drinkable beer form.

Zwickel 500 (5% a.b.v.)
Our 500th batch of beer! Instead of making a huge wild fermented double I.P.A. blended Imperial Stout, we made a lesser known style of German lager. Zwickel 500 is an unfiltered German Pils that will challenge you to learn about a unique style of beer that you may not know about.

Meg's Bride-Ale (4.0% a.b.v.)
Andrew got married! To celebrate, have a glass of Meg's Bride-ale, a light and crisp belgian-style wit. Spiced with corriander, and flavored with blood orange juice, this is a very light wit beer that is dry, fruity, and easy to drink.

Hoppy Little O (10% a.b.v.)
Last time we made a Chouffe houblon dobbelen IPA triple cone it was Hoppy Little Gnome. This time our marriage of an American Double IPA and a Beglian Tripel was made with all organic pale ale malts (hence the O) and a slightly different hopping schedule. It comes in at 10% so watch out!

Black Moon Rye-sin (5.5% abv)
An American Stout with the addition of Rye. Roasty and chocolaty aroma with a slightly hoppy background. It's a full bodied stout that has coffee and roast flavors in all the right places with a lingering bitter finish from the hops.
Posted by brewer a at 12:08 PM 2 comments:

Look for these treats in the near future:

Festival of Wood and Barrel Aged Beers runner up 2 years in a row! 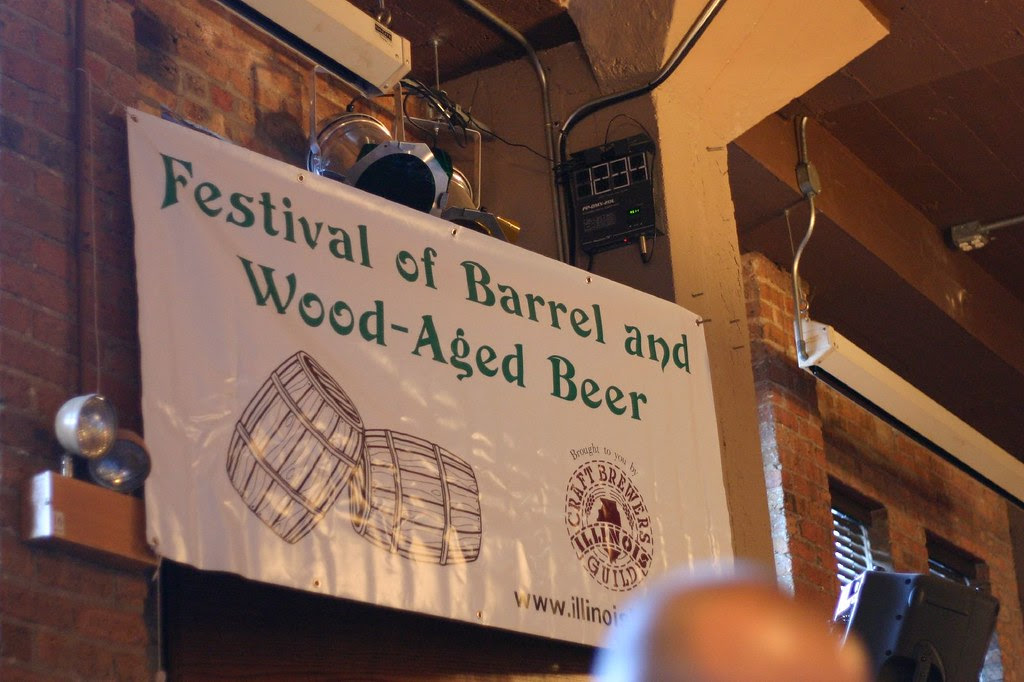 Always a bridesmaid and never the bride is how it's starting to feel regarding Flossmoor Station and the Barrel Aged fest. We won third place in the experimental category with Sarge which I am extremely proud of not only because it's a great beer, but because of the personal and emotional connection of dedicating that beer to my brother. And then we won Gold in the Barleywine category two years in a row with Wooden Hell. It was also strong enough to garner us Runner up Best in Show which is very flattering considering that every year the beers are getting better and we are getting more and more entries. This year we had 85 beers in competition!

A first for me this year was Judging. Very interesting experience especially since I was judging the wild beer categories. 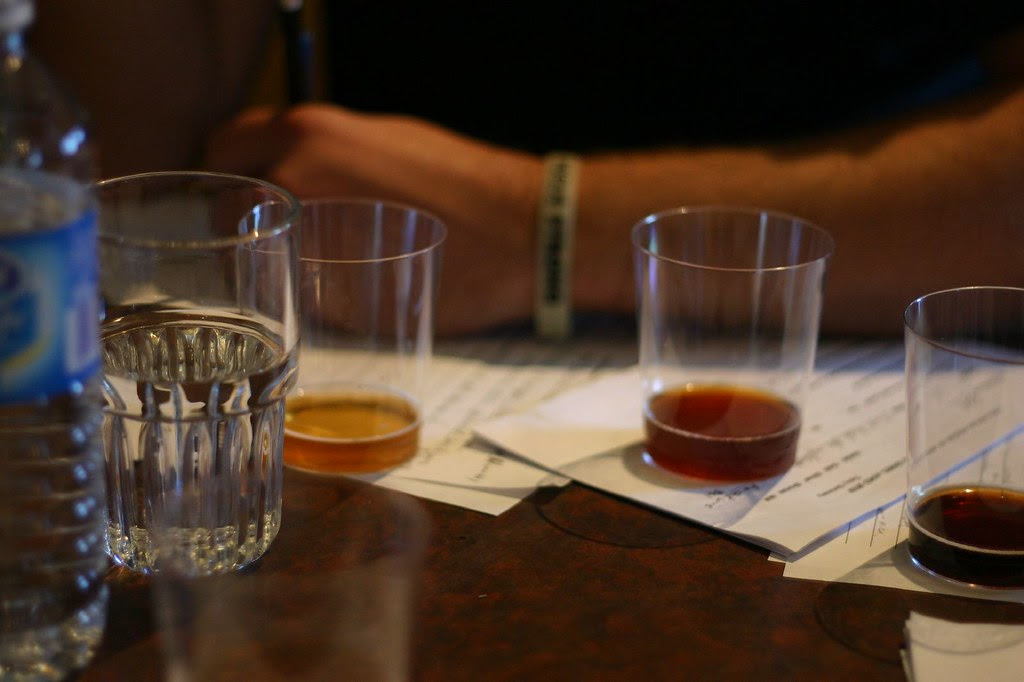 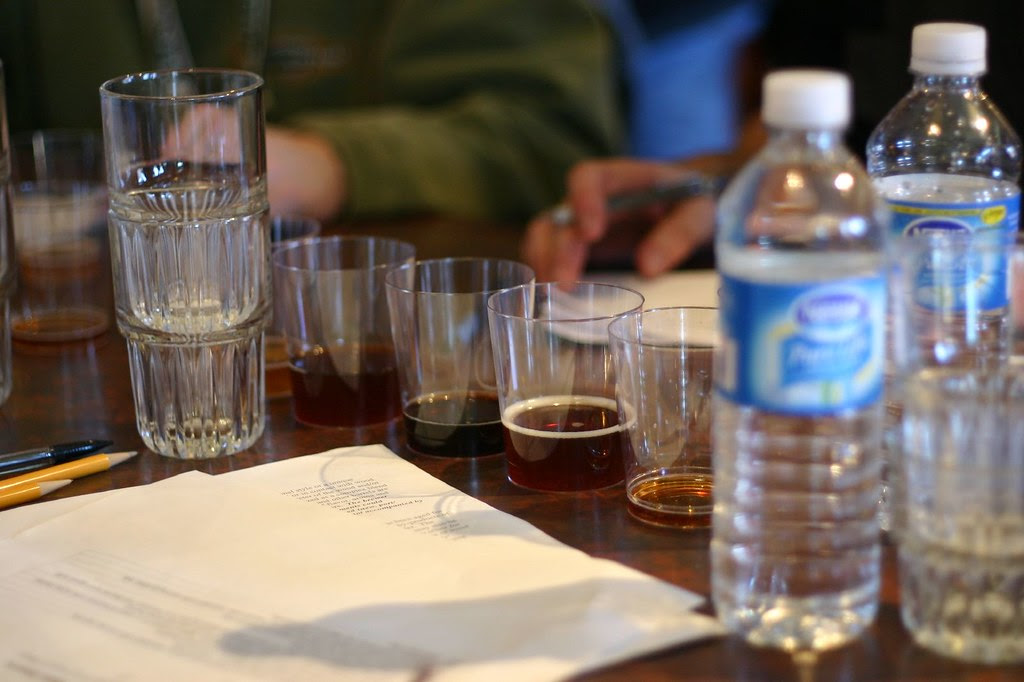 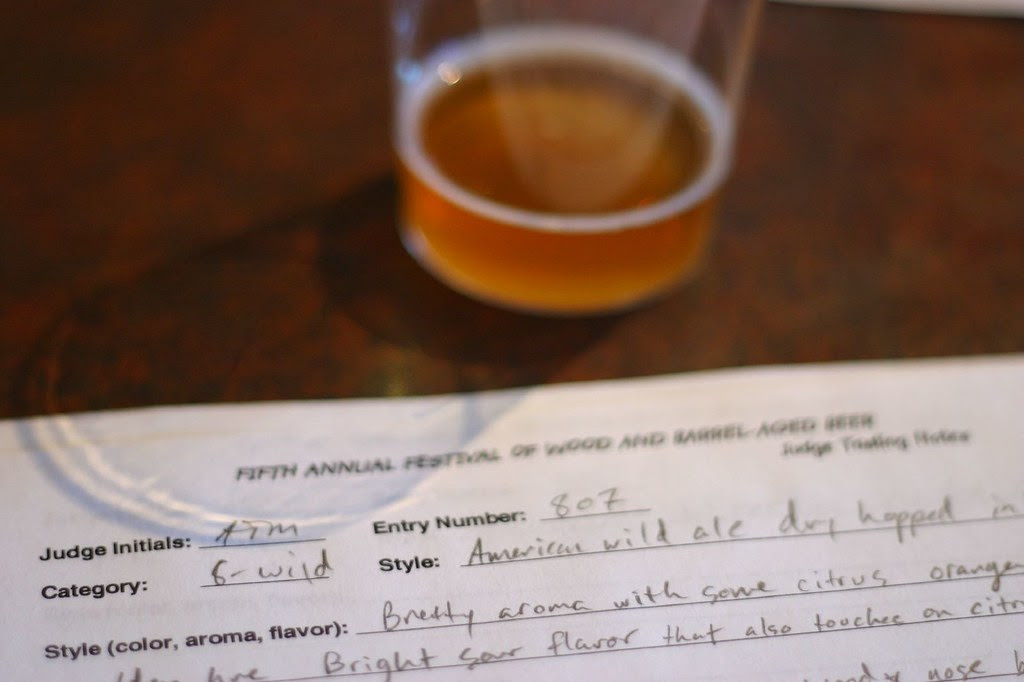 They weren't all easy decisions to make and the back and forth between judges and opinions at the table really forces you to think about what you are tasting and what the festival and specific category is all about. It isn't necessarily pick the best beer or the beer that you like the most on the table and it's important to remember that the Barrel aged fest is all about using wood to make your beer better or impart that unique characteristic to your beer. Not really an easy thing to do when you have three or four beers in front of you that are simply outstanding. 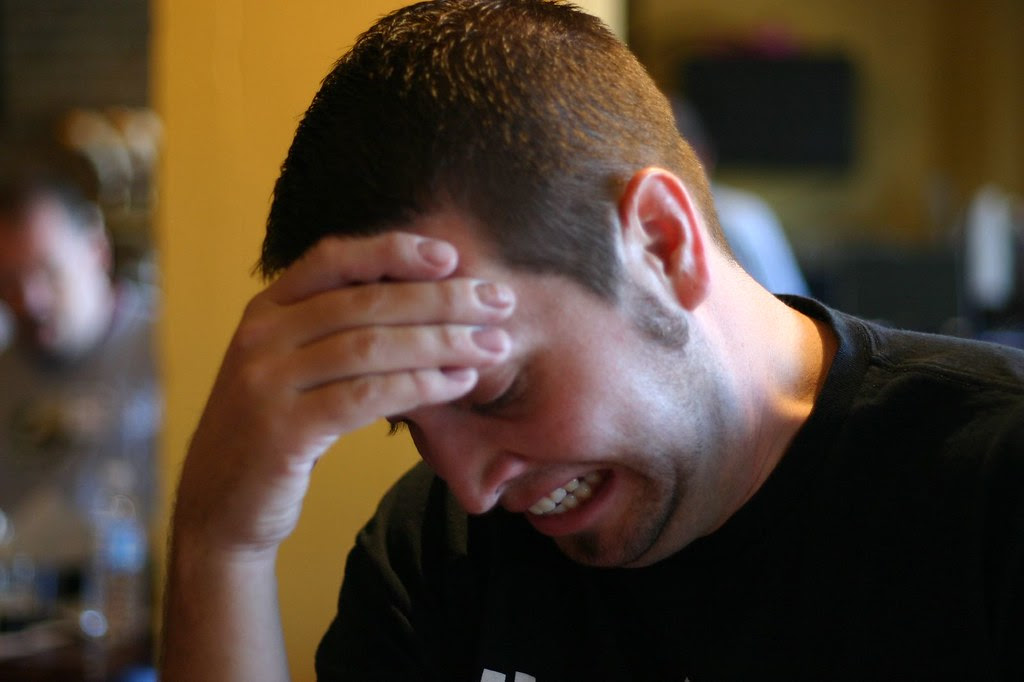 So about 84 wood and barrel aged beers will be tapped Saturday afternoon at Goose Island Wrigleyvile. the event is officially sold out, but I know of some people dumping tix at the door if you still want to try go down. Once again, the Festival of Barrel Aged Beers will be awesome! Here's what we are entering:

And for all those concerned, Andrew has made it through the first four days at the Siebel Institute of Technology and hasn't flunked out yet!!
Posted by BrewerM at 10:01 PM 1 comment: