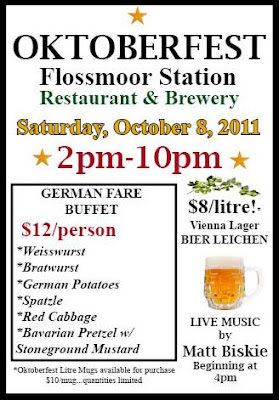 Just wanted to give a heads up about our upcoming Oktoberfest on Saturday, October 8th. We'll be trying our best to re-create a biergarten on our Caboose patio, with long rows of bench tables, Bier ein Mass mit Bier Leichen Vienna Lager, lots of good food via buffet style, music, etc etc. (byo leder hosen)

Posted by Bjorn Johnson at 9:29 AM No comments:

You can feel it in the air, the cool, dry windy days, crisp evenings perfect for a fire, and the best season for beer drinking of the year! We're excited about fall coming, and making some great beers to line up for the Fall, as well as bringing back our bourbon barrel aged beers.

With the "summer of sours" ending at the end of this month, we'll be busting out some barrelled goodies. First on will be the barrel aged Collaborative Evil from 2010, which was a Smoked Porter. We'll also be bouncing between a few different barrel aged beers to keep the varietals flowing, so after the first keg of CE 2010 blows, we'll follow up with a keg of the barrel aged Beelzebeer, and then most likely the barrel aged Pullman, and so forth!

Also coming online for the Fall is our Vienna Lager, which will be our Festbier for the Oktober season. We should be tapping that toward the end of the month as well.

Also coming up is a double IPA, an Imperial Schwarzbier, and some other yumminess.

We also recently brewed a Scotch Ale, the Jar of Heads, which will be put entirely into bourbon barrels, and won't be tapped until it's reached its proper level of sophistication.

That's about all the new news i got, thanks for checking in and hope to see you all soon!
Cheers!
Posted by Bjorn Johnson at 12:34 PM No comments: