Well, I'm a little behind here, but I thought I would post a little about my long weekend trip with the family to Oregon. We found some cheap tix on southwest and three weeks ago headed for Eugene via Portland.
Have you ever spent four hours on a plane with a four year old and a two year old?? 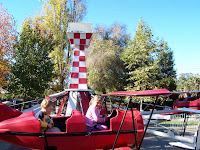 Well, that part went great thanks to a wife who knows how to pack every toy, book, video, tape and stuffed animal into a backpack.
First stop was Laurelwood Public House in Portland. We met the roadbrewer, Teri Fahrendorf for lunch. Great beer and Great converstation and we were back out into the rain and on down to Eugene. 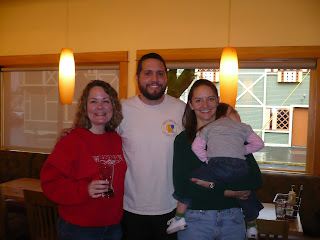 That's Teri, me, Jenni and Ella sleeping (I guess getting up at 3:30 AM PST wasn't easy on the two year old). Nick is off playing in the kids area. VERY kid freindly at Laurelwood. Thanks!

Once down in Eugene, we had a relaxing weekend with Jenni's sister's family.

Nick and Ella hangin' with cousin Javin at BOUNCE and outside Autzen Stadium. Go Ducks!

I hung out at Willamette brewery, stopped by Ninkasi and enjoyed several stops at the Market of Choice (midwesterners-think of high end grocery store with a Binny's/Sam's type selection of great beers)
After spending five days in beer-vana, it was time to head back to the frigid temps in Chicago.