I went to Belgium. Wow! (Part IV) The final chapter. 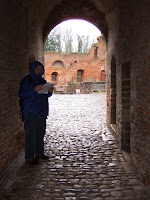 They always say save the best for last, and in our last full day in Belgium we had a blast. From castle exploring to experiencing lambic straight from the barrels to dinner with great people, it was an awesome day and we couldn't have capped it much better.

If you're just joining in, you might check the three previous posts that detailed the 8 day trip my wife Jenni and I were fortunate enough to take before I left Flossmoor. Here's Tuesday in a nutshell:

We trained south of Brussels to Beersel. Here, we had a tour set up at Drie Fontienen and Boon, courtesy of Alex, the production manager of Palm breweries. On this day we were meeting up with the San Diego crew, but they were driving from Ghent to Westvleteren to have some Westy 12s in the cafe. Since the tour was set at 3F for 2:30, Jenni and I went early to see the castle.
The Beersel cast 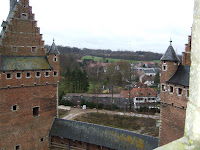 le was very cool. Some better pics can be found at this site. Regardless, we braved the drizzly day and walked up and down several steps in search of the dungeon. We finally found it and I'm sure Jenni was happy because the annoying accent I was using as I pretended to be a knight running around a medieval castle was likely getting rather annoying. And I don't think she could stand another, "Have fun storming the castle" quote. Anyway, if you need something to divert your Belgian beer adventures, you must see the Beersel castle. They continue to renovate the site and it should be even better next time we go. 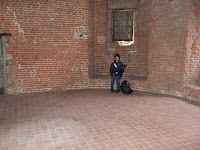 A break for lucnh inside the castle. 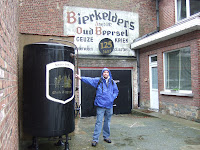 Jenni and I had a little more time to kill so we walked to Oude Beersel. Sadly, it seemed only open on Saturdays. We popped into two more cafes, Oude Pruim and Centrum Hotel for a beer while we killed time. These two places are listed in Tim Webb's "A Good Beer Guide To Belgium", a must have for the beery traveler. Thanks for loaning it to me Jeff. 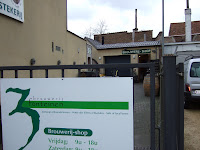 Finally made it to the first stop on the brewery tours, Drie Fonteinen. Armand could not have been a better host. We met up with Alex, who is the production manager at Palm Breweries and he had arranged for us to see this brewery. Armand and his wife Lydie do all the work at this small lambic brewery. That, of course makes him very busy, but he graciously gave two hours! of his time to the American tourists. 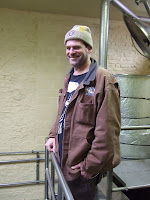 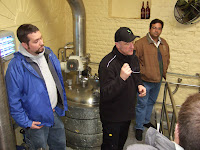 Armand is telling us how lambic is REALLY made. He learned the gueze blending skill from his father (he learned it rather well, I must say). He has been doing it for many years and is now brewing and blending in Beersel. They also opened a cafe around the corner, but sadly it was closed that day so we couldn't indulge ourselves. This is me and Vince, the owner of Pizzza Port learning from the master. 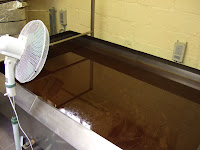 3F had a coolship just as in Cantillon, but much smaller. A micro lambic brewer if you will? The fan is to keep the air moving so the wonderful organisms that make lambic special can find the sweet wort. 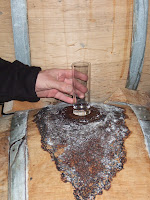 All lambic brewers seem to have a different way of "bunging" the casks when primary fermentation is finished. Armand just had a glass that perfectly fit in the bunghole. I didn't get a picture, but at the next brewery, Boon, they used cue balls from a billiards set! 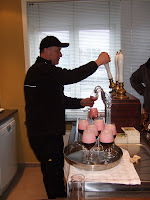 Sampling Kriek in the tsting room. Armand pours it on beer engine as there is little to no carbonation and should not be pushed via CO2. Great Kreik. 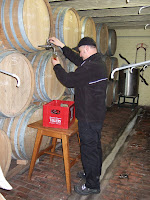 Back in Armands cellar sampling lambic straight off the tank. This was quite a treat!


Drie Fonteinen is not only making some of the best lambic and gueze beer I tasted in Belgium, but Armand was such a great host during his busy day. Thanks!


Next stop, a little down the road in Lembeek, Boon Brewery. 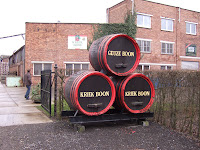 A view on arrival. 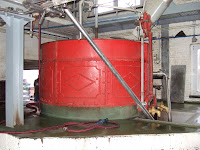 The mash tun at Boon Brewery 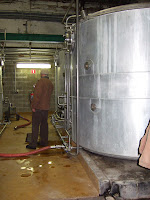 The holding tank as the wort moves from Coolship to wooden barrel. Owner Fran Boon told us that if the barrel that the wort is going to is not ready it could sit in this tank for up to 3 days. Fermentation starts and is proof that the spontaneous fermentation from wild yeast in the air really happens. 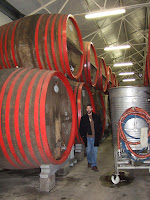 The most amazing thing here was the barrels used for fermentation. They were nearly 10 feet tall! And he had 84 of them! They have a on-site cooper just for tending to the barrels. Really cool! 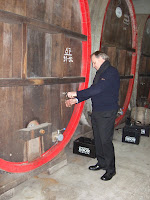 Once again, sampling from the casks. That is Frank Boon, another gracious host. He stayed late at work to show us his brewery, which was an amazing tour. The highlight was sampling a vertical of lambic of 1 month, 3 month, 1 year, 2 year, and 3 year. We could see how the lambic aged and get a glimpse into what the brewer/blender goes through as they try to make a consistent gueze. This was something I never would have been able to do on my own. Thanks Jeff and Alex for setting this tour up.

From there, the pictures end, but know that we had an amazing dinner with many bottles of lambic beers with Alex from Palm. Jenni and I had to take off the next morning to get home and pack up our house for the move to Oregon-not done yet as I type, yikes!-so said farewell to our friends from San Diego and hopped on the train back to Brussels. The trip back was uneventful and the beer I muled back made it safely (I can't say the same for the Kindereis-small chocolate eggs with toys inside- that we bought for our kids. Evidently they are illegal in this country and they had to take them. Thanks U.S. for controlling me so much and letting me know I am a bad parent and don't have the sense to take caution with my children. I toast you with the wonderful beers I brought back from Belgium!)

I wish I could better narrated the experiences I had while in Belgium. I hope a few of these pics and words in some way do it justice. I learned a ton, I drank a ton, and we laughed a ton. Thanks for the memories guys. Until we get back to do it again......
Posted by BrewerM at 7:26 PM