On December 12th for 12 days straight, Flossmoor Station Brewery will release a one-of-a-kind, completely unique beer especially for that day. We will tap the beer when we open and when it is finished, we’ll have the next day to look forward to!

On the first day of Christmas my brewery gave to me… 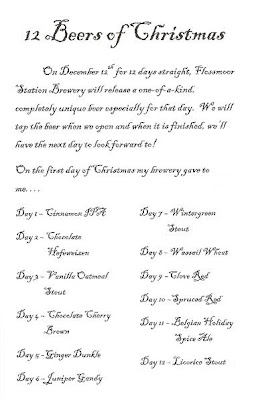 Posted by Bjorn Johnson at 4:01 PM No comments:

The dates for the remaining two tappings for the year are set (finally!)

December 17th at 8pm we will be tapping "CHAOS!!!" A Belgian-style IPA

This is a diversion from the American IPAs we have been putting out there. Actually, the inspiration for this beer comes from a west coast brewery that put out this insanely bitter, not very (hop) aromatic, light colored Belgian-style beer. This one was to be done at the Station! What we get is a light colored "IPA" that has most of the hops added at the beginning of the boil giving an intense and lingering bitterness. The flavor and aroma additions were small and gave a slight balance to the first hop addition. We have let the yeast do a lot of the talking with the additional flavors of this beer. As the name implies, CHAOS!!! was born into chaos, and has lived its short life in it since. From failed coolant pumps and rousing yeast to stalled fermentation and a very stubborn yeast, this beer has been a volatile handful. Delicious with an attitude. Give this one two sips before passing judgment, it may spill itself on you out of spite.

Santa's bag will have new goodies inside if he ever gets a taste of one of these! Not your typical holiday ale, we have left out the usual suspects (clove, cinnamon, nutmeg, etc...) in favor of some lighter spices which will allow the yeast flavors to come through more cleanly. To get a light citrus flavor to our beer, we have mashed with orange and lemon peel along with a subtle amount of coriander. During the boil we added fresh ginger to accentuate the spicy phenols produced by the yeast. A nice red hue, this one is sure to warm the belly.
Posted by Bjorn Johnson at 3:57 PM No comments:

Killer Wood is almost out!

The current offering in the Barrel-aged line-up, Killer Wood, is in its final days at the Station. This smooth, silky, bourbon blast was certainly a treat. I am sure that the next one will be even better received. Anno Unum, an unblended sour red ale, will be on tap to ease the KW absence. This is the same beer that has poured at the Great Taste of the Midwest and the 2009 FoBAB. Look for it in the coming week!
Posted by Bjorn Johnson at 10:52 AM No comments: