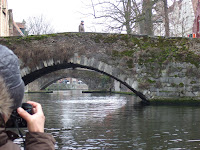 If you didn't read in previous versions, we have returned from our trip to the Motherland and you can read about the first two days of our trip below. This will give you a little 411 on the middle part of the voyage. So...we left beautiful and picturesque Brugge (with the oldest bridge in Brugee pictured there-a mere 600 or so years old!) Actually, before we left, we took a little side trip to Kortrijk. Just north of there in Heule, resides the tiny picobrouwerij, Alvinne. At that location can be found the pre-Zythos festival hosted by the aforementioned Alvinne and their friends at Struise and de Molen. Urbain from Struise and Menno from de Molen were there along with Glen from Alvinne hosting a smashing little fest to welcome in ZBF. In addition to that, I was able to hook up with Devon, Beejay, and Garrit who are interning at Struise for three months as they plan their soon to be in Chicago Brewery, Pipeworks. They have been working hard not only on a business plan but also the nuts and bolts of becoming a professional brewer. Their exploits can be found here. 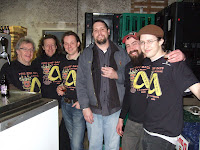 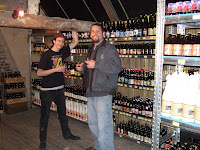 Above is a pic (from the right): Devon, Beejay, Me, Glen/Alvinne, Urbain/Struise, and William? (am I right here??) And then also the bottle shop at Alvinne. Way cool beers for even way cooler prices. Got me some!!

One last word on these great brewers in Belgium. You have likely heard of the great things coming out of Struise. Black Albert, Pannepot, etc. Well, you've heard of it for good reason. One word Awesome. Not only the beers but the guy behind them. Wow. In my opinion, Urbain is one of a handful of Belgian brewers who aren't afraid to veer from tradition and brew what he wants. IF it's hoppy, he brews it. If it's strong he brews it. Barrel aged, no problem. Out of style, no problem. MAde a mistake? just rename it. Sounds like tradition that we are used to on this side of the pond........ Oh, and did I mention, he's a great guy. My hope is to one day join forces with Urbain and make the beer of all beers (hint: I think he's going to allow it;) stay tuned.) 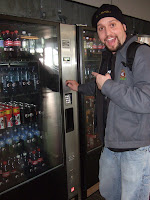 In Brussels we got settled into our apartment and raced to another hotel to meet up with my friend Jeff Bagby of Pizza Port fame and his crew, brewers Noah and Yiga, owner/chef Vince, jack of all trades Dave, bottle shop Sean, and brewer at large Julian. Let me just say-what a great bunch of guys to hang out with in a foreign country.
We were fortunate enough to catch a tour bus to Grote Dorst for a special dinner and sour beer tasting. Pix below: 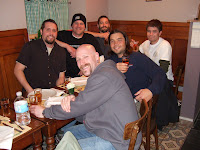 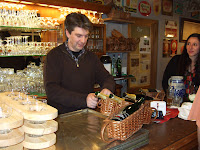 How would you like to drink 20 year old Gueze? Damn tasty folks!

Then, as luck would have it, we ran into Matt Brynildson of Firestone Walker, John Mallet of Bell's and Hedwig, the head of production of Duvel. Yeah rollin' with royalty. 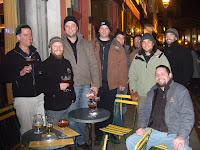 Now it's time for Saturday and time to find Jeff and crew to head over to Cantillon for Open brew day, basically an open house where they are brewing for 12 hours and you walk around bugging them and drinking lambic beers. Well, it's quite a long story but we had trouble locating Jeff because he finished Friday night with a secret cellar tasting at Meoder Lambic, pub crawlin' through Brussels where the doors were locked and the shades were pulled, hit Cantillon once for mash in, taxied to Hannsens for a tour he had set up and then hit Cantillon again for the start of the boil. Quite a 20 hour session and sorry Jenni and I missed it:( Below are some scenes from Open brewday a VERY cool experience. 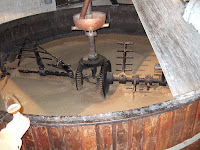 The very old mash tun with the mash mixer that was powered by large pulleys. The lambic style of brewing involves a turbid mash, so it starts out very dry and thick and eventually gets loose and thin. They need a little more than an assistant with strong shoulders. 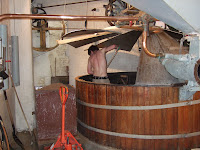 To clean out the mash tun, you have to take your shirt off. I think I plan to do that next week. It get's hot in that brewhouse! 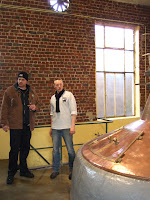 Jean Van Roy is the 4th generation brewmaster. Fantastic host despite the fact that he was brewing about 100 hl of beer that day. 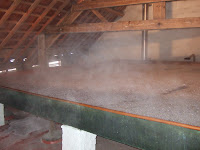 This is the coolship where lambic beers lay in wait overnight, cooling by the crisp evening air and being innoculated by the wild yeasts in the air.

This little number strains the whole leaf hop flowers out of the wort prior to going to the coolship. 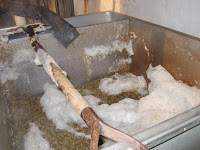 The most wonderful part of a lambic brewer is that they don't have stainless steel fermentors. All fermentation happens s 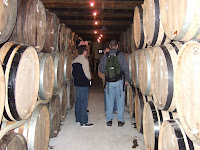 pontaneously in wooden casks. Many of them are wine barrels but some are specially built barrels called foeders. At Cantillon, they had rows and rows of barrels. A few still had the funky yeast goo gurgling up from the bunghole. Cool! 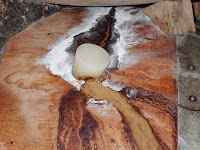 Since we lost much of the Pizza Port crew due to the "Friday Night explots" Jenni and I were on our own. We grabbed a kilo of mussels from the fish market and had a little night in....well til we went out late to Delirium Cafe, Beer Circus, and Mort Subite....I love Belgium!

Tomorrow, Zythos Beer festival and a day of churches and the EU in Brussels.
stay tuned...
Posted by BrewerM at 10:15 PM

Great pictures, When I was at Cantillon they were bottling but not brewing. It was cool to see it all in action. What a incredible place to visit.