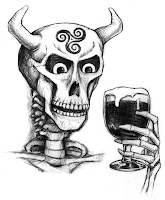 Up Coming Calender of Events

Here are some dates to write down on your calender and sign up for.

Every October, the Brewers Association puts on the Great American Beer Festival (GABF), where hundreds of brewers and thousands of people descend upon Denver for three days of celebrating beer. The culmination of this event is the awards for the best beers in 75 categories, as well as naming the breweries and brewers of the year.

Jill Jaracz talked to Matt this week. Read about it at Gapers Block.
Posted by brewer a at 7:34 AM No comments: It was an especially awesome tour. I can't reccomend New Belgium highly enough. And if you get a chance to go there in the near future, make sure to try Ben's Saison, part of their Lips of Faith series. Ben was in my Siebel class and made a great Saison.
Posted by brewer a at 12:59 PM 3 comments:

Hoppy Little "O" (6.5% a.b.v.)
Just like last time, except a little easier drinking. A beautiful marriage between a hoppy American IPA and a belgian ale. And made with organic malt of course. We're off to Denver!

If you don't see us around the brewery the next several days, it's because FINALLY, this is the week. On Tuesday I head to Midway to jet off to the Great American Beer Festival in Denver. It's put on by the Brewers Association. This is the biggest and best beer festival and competition in the country. Any beer brewed in the United States is invited to compete. In past years, if you haven't heard, we've done rather well. I always look forward to GABF time as we get to try world class beers, interact with colleagues across the country and see how our beers measure up with some of the best beers in the world. It's really a brewer's chance to shine and it gives us a little something to shoot for each fall. This year should once again prove to be profitable from that perspective.

Wish us luck. See you next week!
Matt