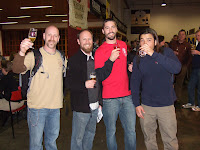 Part III in the voyage de Belgium starts on Sunday morning as we boarded the train (which is remarkably easy to use) and headed to a little town called St. Niklaas. Why the Zythos beer festival is held there I will never know, but it was a nice little trip and a pretty good festival. IF nothing else, you could get a lot of great beers all in one place. And they served food, some of it traditional Flemish dishes, for just a couple of tokens. We had a great time sampling. Three of the San Diego crew, Julian, Yiga and Noah pose with Matt Brynildson of Firesone Walker between beers. 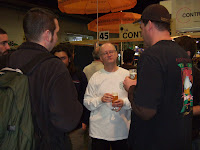 We were also lucky to have a friend to guide us around a bit, and that was Carl Kins. I met Carl a couple of years ago judging at the GABF. Carl judges at that event and the World Beer Cup. He has visited Flossmoor Station and I was happy to meet up with him both Thursday at the Pre Zythos fest and Sunday at the Zythos fest-Thanks for the ride from Alvinne Carl!! 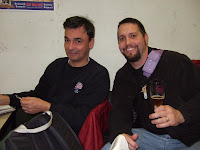 Finally, I was also fortunate to see Joris Pattyn on both Thurs and Sunday as well. Joris is amazing and his knowlege and palatte with beers is incomprehensible. I had sent him a couple of special beers from my brewery and the moment I walked in he had two beers from his cellar. Wow! what a greeting. One was a very special beer from Westmalle that I can't get. The other was from a closed brewery, and the beer was 20+ years old, I think. It was actually a "mistake" beer that was double cherried. It has been resting in Joris' cellar for quite some time. I can't wait to try it. 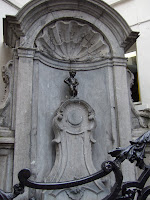 Back to Brussels. When you are there, you must see the Mannekin Pis, a statue of a little boy pissing. You have to see it, because, well, that's what you do. Jenni was dissapointed at it's lack of size. I mean HEIGHT you sicko! 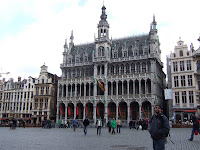 The Grand Place, which was just two blocks away from our apartment was beatiful. None of our pictures will do it justice, despite the fact that Jenni takes pretty good pictures. This was one building. The architecture and the grandeur of it all was amazing.

Since our San Diego buddies had full cars as they headed from Brussels to Ghent, we couldn't join them on a couple of brewery tours, so Jenni and I roamed around Brussels a bit. We hit a couple of churches, St. Catherines and St. Michel. St. Cats looked dirty and run down but was bery much a working church. That's the first shot below. And St. Michel is beautiful. While the pics below again won't do it justice, the stained glass and the statues were really cool. It was SO big as well. 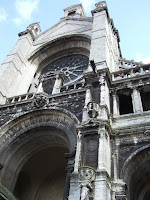 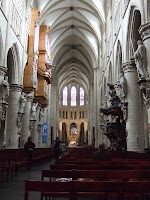 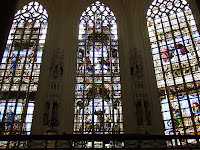 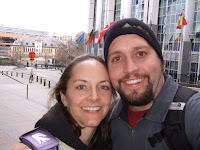 hoofed it across town to see what the EU building was like. While not impressed (and we assumed that would be the case) it was neat to see where the capitol of Europe is located. And we burned some calories in the meantime. 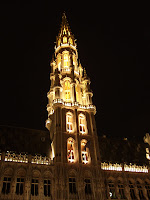 Finally, after a couple of more beers, Jenni played with her night setting on the camera and tried to get the "lit up" Grand Place. Not bad. Trust me, it was gorgeous!


So, with one day of brewery travel to go and one day of traveling home, the trip is winding down. Tuesday is the tour of Beersel castle, Drie Fontenein, Boon, and dinner with Alex from Palm breweries. This was one of my favorite moments of the trip. Stay tuned for that....
Posted by BrewerM at 12:12 PM