Wow.. I guess I must have been on vacation. Started this recap and then set it aside. time to finish the update.....

So as I alluded to, I traveled to San Diego a week or so ago(edit: a month or so ago) to Pizza Ports Strong Ale Festival. This Fest began 12 years ago as a brainchild of Tom Nickel formerly a handful of brewpubs and now of O'Briens), Tomme Arthur Port/Lost Abbey and Jeff Bagby, head of the pubs for the Pizza Port Empire. The idea is two days of beer sampling. All beers are over 8%. Woot! This year, their 12th, celebrated the 75th year since Prohibition ended and the goal was to gather 75 strong ales. Well, they overextended themselves and nabbed about 103! Beers were mostly from California but they also collected several from Arizona, Chicago and the East coast as well. And all were over 8% abv. Yeah, that's a lot o alcohol. but more on that later, let me back up.

I arrived in San Diego on a Thursday night. Christmas carols were ringing thru the speakers at the airport and a 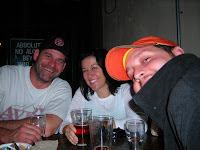 s I exited baggage claim I could feel the warm tropical breezes blowing in the doors and I could see the palms. Weird, really weird. I'm a midwest boy and Christmas means cold and snow. (In fact as I type this it is about 1 outside -that's Fahrenheit in case you wondered-and ice galore) Once I got over that, Jeff Bagby picked me up and we grabbed his better half-much better half, Dande (and their pooch) and headed over to the semi new Toronado. What a great line-up of beers and a great place to tip back a pint. When I walked in the door, who did I see, but the one and only Pete Crowley of Rock Bottom Brewery in Chicago. Wow, half a 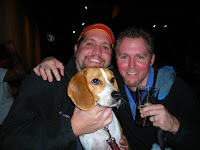 country away and I run into my buddy. Oh wait, I knew he was doing a brewery audit in La Jolla and had planned to meet up with me . So, we had a few Califonia brews and parted company. We drove up to Carlsbad, about 20-30 minutes north where I would be staying for the night.


Upon arriving at Casa de Bagby in Cardiff by the Sea, I encountered one of the largest beer collections I have seen in a long time. I like to drink beer, evidently Jeff does not (just kidding, pal!) He has rare beers, common beers, vintage beers, and oh yeah, 12 beers on draft. Yeah baby! Maybe a pic or to of his shelves if he sends them over. Once again, forgot the camera (stupid!)

On Friday morning we headed up to Carlsbad Pizza Port, with a pit stop for Breakfast Burritos-sweet! I helped a bit with set up. That consisted of perilously riding up on a fork lift to hang tarps. (If you work for OSHA, stop reading at the last paragraph). It seemed like "tarp overkill" because rain was not in the forecast, but I was reminded that double IPAs get skunky real quick in the San Diego sun! AHA! You are not in Kansas anymore toto.

Around 11 AM I jumped in Jeff's truck and motored over to Stone Brewing in Escondido. All I can say is wow! Check out the website. I wish I had my camera. This place is just awesome-not only the state of the art (and clean) brewhouse but the gardens and the menu are great. Wish I had some pics to share. I had been there before, but it was for the Craft Brewers Conference gathering and seeing it with less crowds was much better.

Then I headed to the festival. They have a VIP session from 1-4. Less crowds. Rare beers that will run out quickly. Dark Lord from our very own Three Floyds ran out first. Yeah! Did they just send a growler??? This was a great feature to the fest as you could move a bit better and hit the rare beers. I met up with Pete (RB Chicago) and also Marty (RB La Jolla) who would be our taxi driver Sat to Lost 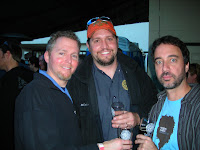 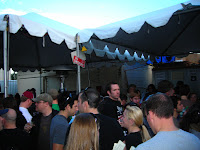 Next Stop:Bed. Since the hotel was a mere 6 blocks away, we could sneak away whenever we "needed" to. A quick stop in the PP bottle shop to buy some beers that we would pass out with on the nightstand (hint: keep your a/c cranked in the hotel room, and the beer you passed out with will still be cellar temp. in the morning.)

Hydration!! A little vitamin water and a walk on the beach and I am ready for the day! 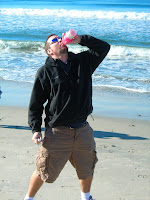 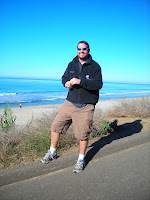 Pete and I caught up with Marty again and had lunch in Oceanside. There is a new brewery that is waiting to start brewing. Kirk McHale, formerly of Pizza Port, is owner/brewer-but is being tied up by the city and has a dormant system collecting dust. Good Luck Kirk! 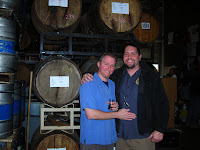 From there we headed to Lost Abbey. Oh goodness does Tomme have barrels galore. We sampled straight from the barrels. Need I say more??

But I will. This is a picture of their bottling line. Homemade I am told. I 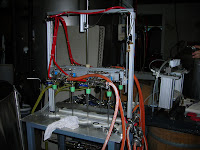 was blown away that they just had a 8 head tabletop-ish filler. We have only 4 heads, but I think we are more automated. Sure we spent a whole lot more money, but I think it's time to upgrade and pump a little bit more beer out of there. Come on Tomme, beer drinkers await!

So, we were set up like kings (well, visiting brewers) atLA and then headed back to punish the 'ol liver and try take on a few more of the beers we missed Friday. 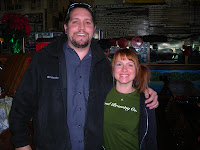 Hey, is that 2008 World Beer Cup Small Brewpub Brewer of the year, Tonya Cornett? Why yes it is. She was in town to brew a collaboration beer with Tomme at Lost Abbey. What a great person-and brewer.

So the fest wound down. I assisted Pete to the Extended Stay America about 11:30 (just to make sure a car didn't run him down and leave Rock Bottom Chicago brewerless) and then headed back to PP for post game festivities. Needless to say, much of the details are a blur, but I think I recall jeroboams of Duvel and something else, shutting down a bar down the street, drinking in the dark, a stray roll of red duct tape (sorry Jeff) and a stroll around Carlsbad looking for some place to feed us. Dennys it is folks. Bring on the omelet at 4AM!

Blurry eyed and foggy headed it was time to venture back to the midwest on Sunday morning. Thanks to Pete for the lift and entertainment of course. Major shout to Jeff Bagby and the entire PP empire not only for a kick ass fest, but also for extreme hosting skills. We will definitely be back! I'm not sure if I could handle 70 degree walks on the beach in December every day, but...wait, yes I could!
Awesome trip........
Posted by BrewerM at 9:57 AM