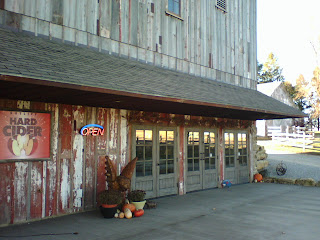 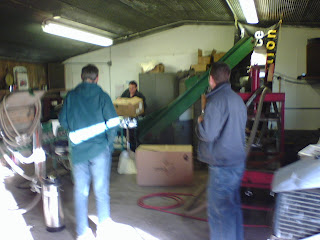 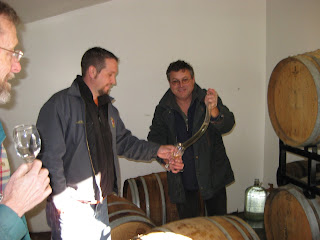 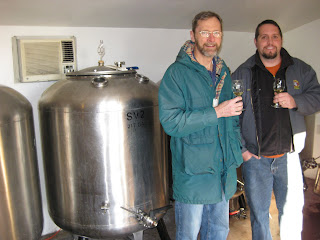 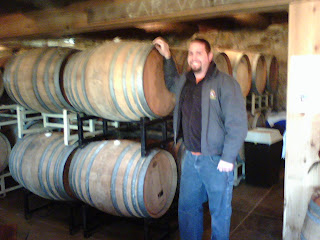 A little blurry, but this is in their new tasting room where many of the barrels of cider will sit and age for 9 months before being blended and bottled. they have a lot more aging space now and are looking for bigger fermentors as well. I would kill for racks and racks of aging barrel space!
Sutliff Cider company makes three main products, Hard Cider, Soft Cider (non alcoholic) and Pure Cider (fresh press unpasteurized cider) John got to take a jug straight off the tank. yummy!
If you are ever in the Northeast area of Iowa take a little side trip to Sutliff. You'll be glad you did. Now, time to go crack a bottle out of that case I purchased.....
Posted by BrewerM at 8:01 PM

Checking out Sutliff has been on my to-do list for quite some time. It's a logistical nightmare, but we're able to coordinate with Scott so we can carry it at Electric Burrito, in Southwest Iowa. It's hard to leave it alone.

This is all well and good, but why do Americans call cider "Hard Cider"? How did that come about? I mean, what do you consider "cider"? Apple juice? Why not just call it apple juice? It seems like almost deliberate perversity.

J.-definitely get up there if you can. The process is pretty cool and Scott will give you a major tour.

Jeffrey-A quick google search took me here: http://www.allaboutapples.com/cider/ for an explanation of cider vs. juice and why in America we call it hard cider. I'm just following the what we do over here. Since we can buy cider and juice (and they are different) then we must have another name for the alcoholic version-hard cider.

Here in the States we have a little saying: "If it's clear and yella', you've got juice there, fella! If it's tangy and brown, you're in Cider Town!" Hence the distinction between (non-hard) cider and apple juice.

To any Chicago-area readers: if you're looking for a cider fix a little closer to home, check out AeppelTreow: http://www.aeppeltreow.com/. They were at the Great Taste of the Midwest and blew me away. I still haven't had a chance to stop by, but they're just across in the IL/WI border.

Russ--I second Aeppeltreow. I quite liked their perry, and everything.