On The Road Again

The call of the open road. Like a band of gypsies we go down the highway. I'm not sure if that's the same or similar to call of beer but Matt and I found ourselves waking at 5 am this past Wednesday to journey on down to St. Louis to see our good friends at Schlafly and figure out a few more pieces of this bottling puzzle. We arrived right on time to assist a little with setup. On the left there is the Intern, Nick, and Brennan is on the right setting up the machine. Brennan and Stephen are the brewstaff at the Taproom. Brennan does most of the brewing and Stephen is in charge of all things beer. Stephen is also an advocate of utilikilts. (See the commercial: Round2 4th Place: Kegerator)

Once the machine was up and running we started asking every question we could think of. Kudos to Brennan and Stephen for answering them all to their best ability. Once we got into a rhythm, Stephen let us tag in and run the thing ourselves. Amazingly enough, we didn't break anything, and by the end of our time bottling, not only did we feel like old pros, but we could troubleshoot the bottler by ourselves. Very Impressive, I know. So after eating lunch and having a few beers we took off to the hotel and tried to contain ourselves. Why you ask? Because the real reason we went to St. Louis was our next stop: For those of you that follow along on a even semi-regular basis, you should know that BBQ is one of my most serious passions. We stumbled upon this place last time we were in St. Louis for Schlafly's Repeal of Prohibition fest. There were a dozen cardinals fans to my left that were splitting up a season ticket package. The girl at the counter didn't know that Schlafly was made in St. Louis. Blerg. 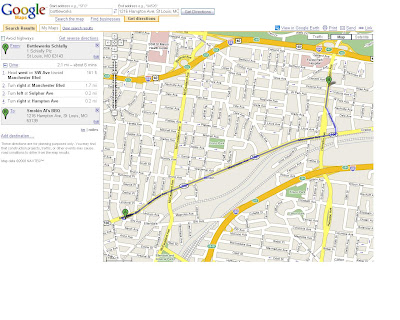 Literally two miles away from the source of the beer and she didn't know where it was from.

Anyway the Burnt Ends platter and Rib Tips were very good. I could only eat half of my food I had so much in front of me. Needless to say I took it home.

And because last time we went there we were too full of beer to truly enjoy the place, we checked out Square One in Lafeyette Square. They have an amazing bar. That is a window down to their cellar, which I thought was very cool. I don't think I would really want people watching me every time I had work to do in the basement, but it was still cool to look at. I still want to get back to this place in the Summer, because they have a beer garden that looks like it would be a blast to hang out in during warmer weather. That's the moon in partial eclipse if you look really close.

So that was more than enough for one day. Matt and I were both beat. Plus we had to drive up to O'Fallon the next day to check out their bottle rinser set up. When we got back to the hotel the weather report was pretty shitty. Ice, sleet, snow, rain, wind, and more ice.

It made for a really brutal drive around the St. Louis metro area. I'm pretty sure we could have made it to O'Fallon in about 20 minutes but it took us at least an hour to cross town and get up there. The good news is that even though it took a long time to get up there, their homemade bottle rinser set up looks like it will work very well for us, so it was a worthwhile trip. Then, since Matt has never been on the AB tour before, we swung by the home of "The Great American Lager" or whatever nonsense they are calling it these days and guess what? NO TOURS DUE TO INCLEMENT WEATHER. Jerks. Oh well. We took long enough to get home with the awful road conditions that it was probably better that we didn't stay another hour or hour and a half in St. Louis anyway.

I hope this blog post is long enough to tide you over for a while, because we still have a lot to do before bottling starts. I'm writing this on a Saturday. Hopefully by next week we can start tinkering with the machine and seeing if we can't get some beer in a bottle for testing purposes.

On the homefront, Gumballhead is almost out, and Racer 5 from Bear Republic will be up next. 11 is the current barrel aged beer pouring.

When I get a chance I'll put up some ancient beer history that I learned about at the Oriental Institute at the University of Chicago last week.

Good luck with the bottling. I'm looking forward to here about how it goes. Sounds like the St. Louis trip was a success!

I visited Square One when I was in St. Louis earlier this year. While their beer was excellent, what blew me away was the selection: the bartender told me they try to keep at least twelve house beers on tap at all times. C'mon, Matt and Andrew... you've got some brewing to do to keep up with that!

Russ, I don't know how hard you look up at the board when you come in but we have 8 year round house beers and 2-4 seasonals on always. Plus we now have a guest tap of other great craft beers. Is selection really an issue here?