We had a great time at the Brewpub Shootout this year, they really put on a great show and all the breweries that attended brought out some truly great dishes and tasty brews! We got to walk away with some accolades as well, which is always a terrific feeling. 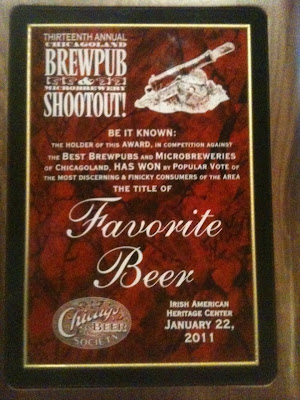 We were granted 2nd place for best beer, and we're not totally sure which beer fetched the title, but we're very proud our beers were well received 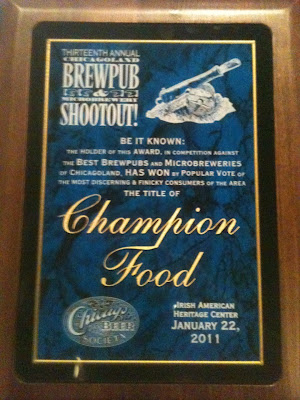 Additionally, we got 1st place for our food, which Chef Eduardo pulled together an amazing dish of beef tenderloin served over sweet potato mash. He seared the beef on the spot, which may have helped draw extra attention to our table. In fact, almost everytime he flared the burner up, a large group would gravitate toward us, drifting with the smell of beef.
This was my first time attending the Shootout, and it was an absolute fantastic event. It's really nice to have food being a focal point of a beer fest, especially after tasting so many great beers. Some of my favorites from the day were the potato dumplings from Rock Bottom and the Nutella bread pudding from Half Acre. Also, the other group of Rock Bottom'ers (east and south? or north and west? I can't remember how they split that up) brought out the liquid nitrogen to flash freeze raspberries over ice cream, which was really cool to see! I wanted to steal some of the liquid N2 to play with...
Revolution walked away with the best food and beer pairing, and I can't remember exactly what they brought, but it was a great dessert pairing with a Citra hopped IPA. The newly established Haymarket also received some awards, I think one in each catagory (beer, food, and pairing), and took first in the best beer.
We have pictures to come soon
cheers!
Posted by nickb at 11:14 AM