So today I'll wrap this up as Andrew is surely ready to document his trip for meat in Memphis this past weekend. If you're picking up the story at this point, you may want to scroll down and see how the first of our trip played out.

So, the weekend was upon us and we did several things on Sat and Sun-Cinco de Mayo party(you don't have to drink Corona in Oregon-who knew?), King Estate Winery, and the Bier Stein.
Check out the Stein if ever in Eugene. It is a bar/package liqour store with the biggest selection in town. There are ten draft lines, a small bar, and several High top tables. Then there are rows of coolers packed with beers from around the world(they may be up to around 800 different beers). The best part is that you can grab a beer from the cooler and either take it to go or sit down and tip it back with a friend. Chip Hardy is doing some great things in Eugene.

Monday was our trip into the mountains toward Bend. We were going to Deschutes Brewery, Silver Moon where a good friend of Matt Lee's (former FSBC assistant)-Evan Taylor-brews, and Bend Brewing Co.
The weather was wonderful all weekend and Monday was no different. 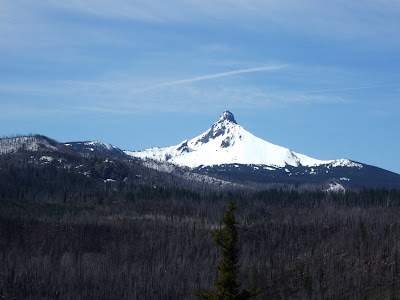 We went right to Deschutes, a regional microbrewery who is growing by leaps and bounds(maybe 4 times the size of Goose Island). You might know several of their beers with probably the most well known, Black Butte Porter.
We got the deluxe treatment at Deschutes and were toured around by Paul, a principal brewer who's main duties were in the brewpub in town. The have an older 50 barrel brewhouse and a newer 150 barrel state of the art Huppman brewhouse which is controlled by computers. Just for reference, ours is 15 barrels!! Here are some pix of the old system and the new.

A picture from the hop cooler at Deschutes. They ONLY use whole leaf hops. This roomed smelled wonderful!

Paul, you lead a great tour!

These computers run the new brewery. A back saver for sure!

This 600 barrel fermentor holds my yearly production. Man we are small!
A couple of little men walking amongst the trees.

A bird's eye view of the bottling line.

Checkin out Deschutes brewpub downtown.
After lunch at Deschutes and sampling many of their beers, we met up with Evan Taylor who is a brewer at Silver Moon Brewery in Bend. Silver Moon has been open about five years and recently opened a tasting room to go along with their homebrew shop. Evan is a college friend of Matt Lee who used to work with me. He moved to Bend and pounded the pavement to find a brewing job and, like the rest of us, worked his way up from the bottom. Here's a picture of us checking out his brewing system. 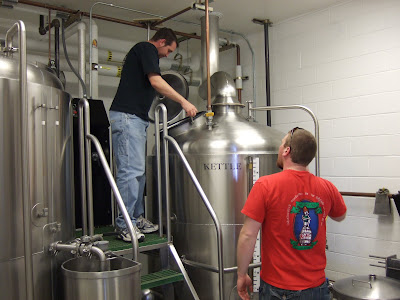 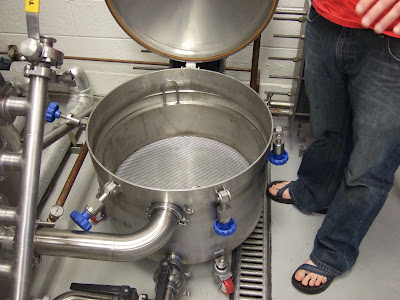 Everyone seems to have a hopback in the West. Must be nice. 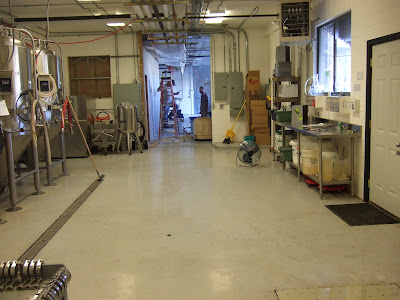 Wouldn't it be great to have open space in a brewery. Must be nice!

So we also walked over to Bend Brewing Co. We forgot to get the camera out, but we found that Tanya is brewing in tight quarters and despite that is making great beers. She won the gold last year at GABF.

After a quick day to Bend, we had to coast back down the mountain so we could fly back to the flatlands on Tuesday. All this and not even a stop in Portland. I hope this shows you that:
A) you have to travel to Oregon
B) you have to focus on the beer
C) give yourself plenty of time
D) leave your suburban anger and aggression behind. People drive slower, people are friendly despite our view of midwest vs. the coasts, and beer flows from every rock, tree, and crevice.

Get yourself there and enjoy! 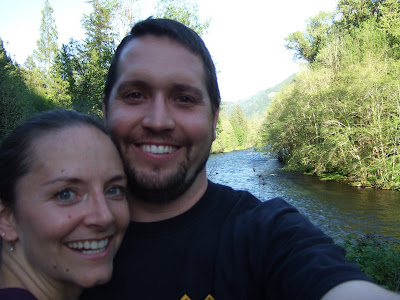